Run by Jeffrey Steele, Natasha Borders, and Benji Michalek, Hanging Lantern takes pride in not taking themselves too seriously, while still providing their customers with memorable, one of a kind interactive experiences and fantastic worlds they will remember forever. Hanging Lantern endeavors to create realms in which players will feel safe being their true selves while they adventure in them. With a dedicated team, a love of fun and wonder, and a commitment to delivering the fantastical, you are guaranteed to have a good time at an event with Hanging Lantern operating behind the scenes.

Hanging Lantern’s current blockbuster project is Real Royalty, a three day blockbuster semi-competitive LARP for 40 or more players with a dark fairy tale setting. In Real Royalty, players will represent one of six twisted fairy tale kingdoms as they scheme, backstab, and garner support to become the new right hand to Princess Generica. Set in the home castle of the princess herself, each team will have to devise a strategy that plays to their Kingdom’s own unique strengths and weaknesses as they navigate a sadistic web of treachery and deceit in the name of the lady’s favor.

Each kingdom proudly displays its own unique visual style for purposes of costuming. The Kingdom of Snow, for instance, are very well dressed in tailed jackets and gowns of gold. The Snow Kingdom is currently wracked by an economic crisis and a political rift between Snow White’s mafia and their black market jewel mines and her stepmother, the widow of the rightful king. The opulent Kingdom of Velvet echoes the style of 17th century French aristocracy, complete with powdered wigs and big poofy dresses. Extravagant hedonists, the Kingdom of Velvet projects the image of having no lower class at all, though closing their borders to immigrants and churning out indulgent confections by the cartload certainly helps maintain the charade. The wardrobe of the Kingdom of Glass favors a decidedly more medieval style with its puffy-sleeved gowns. Still reeling from the scandal of their prince marrying the peasant Cinderella, many of the other Kingdoms have turned their noses up at the Glass Kingdom, despite their recent return to power under the rule of their new princess. The Kingdom of Tides go for a far more naturalistic look in their attire, focused more on decorating themselves with nautical materials like seashells than on flaunting fancy fabrics. Initially fleeing to the shore to escape the iron fist of King Neptune, the other Kingdoms see them as little better than barbarians and rowdy troublemakers. The style of the Kingdom of Petals, is, to put it exceedingly simply, steampunk. After the Beast found his true love, they swore never to be dominated by magic again, instead turning their attention to technology and machines. The Kingdom of Emeralds cleaves to the style of Prohibition era America. Constantly in revolution, the Kingdom of Emeralds remains the most magical of the six Kingdoms, and the most mysterious, surrounded by a treacherous desert.

Hanging Lantern is brining this same expertise in twisted world-building and creating diverse factions with complex motivations to the slice of Pandaemonium they’re creating for HLGcon this October. 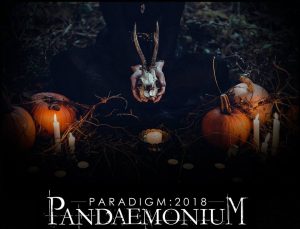